In the previous post, I did an introduction to Linked Lists. The feedbacks and corrections were the motivation to continue, I'm happy you people found it nice, thanks!

Today, I'll be taking a look at the linked list class, its use and some methods. If you haven't read the introductory post to linked list, you should read it first.

Before you proceed, I am more comfortable writing in Python, I'd try my best to translate code to JavaScript and the likes :)

As I discussed in the previous post, a linked list is a continuous list of nodes. The nodes make the linked list, actually. The linked list class serves as a wrapper for adding functionalities and efficiently using the nodes. Take for instance, I want to append a node to the middle of a long chain of nodes, I'd have to perform it manually like this:

Stressful, isn't it? Imagine I need to perform this same operation for a couple of nodes, say 10, I have to manually do this every time. This brings forth unnecessary code bulkiness and complexity - space. Having a Linked List class with a method solves this all.

The Linked List class is an independent class. The initialisation of nodes in the class uses the Node class still. Here is a linked list class implementation:

A linked list begins from a head node to the tail node. So, when you initialise a linked list, you start with a head node and to add other nodes, you need to add a method for that. We'll add two methods:

Let's start with the append method:

I'll break down the process in the code block in a quick summary:

The first thing the method does is to create a new node and store it in a variable. Next, it checks if there's only one node in the list, if that turns out to be true, append the node to the head then return. However, if the head node isn't the only node in the linked list, traverse the node till we get to the tail and append it there. 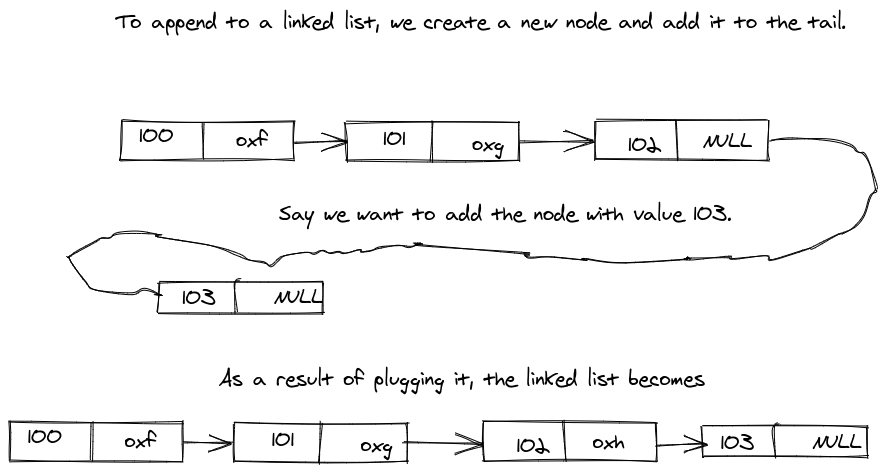 Let's implement the prepend method, this is actually very simple. Just after the append method, add the following block of code:

Here's a diagramatic explanation of the prepend method: 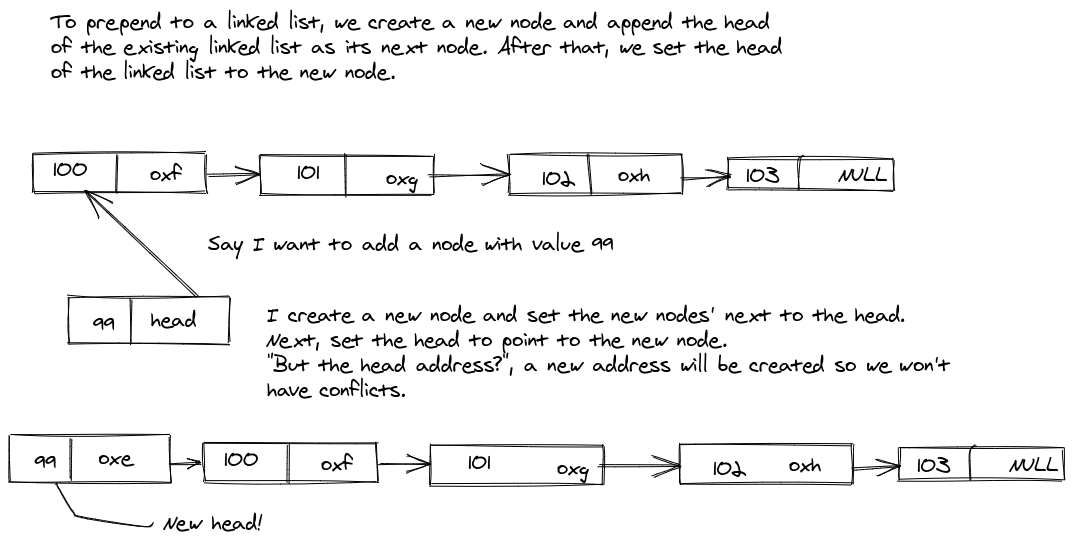 The last method I'll be implementing in this blogpost is the printList method. This method enables us output ( or print ) all the node values in the linked list as an array. Implement this method after the prepend method.

The printList method traverse each node in the linked list and stores the value in the result array.

In this short blogpost, I introduced the linked list class and basic methods - append and prepend. In the next blogpost, I will talk about other methods for reversing a linked list, deleting nodes and swapping nodes.